William Nordhaus today earned the Nobel Memorial Prize in Economics for his pioneering work on climate change.  Hooray for Bill!

Jesse first encountered Bill’s work in the late 1970s, started a magazine file of it, and retains to this day first editions of the classic inventive papers from 1975, Can We Control Carbon Dioxide?, and 1977, Strategies for the Control of Carbon Dioxide, and others that followed (see photo below).

Jesse served as a research assistant to Bill during the 1981-1983 Carbon Dioxide Assessment Committee of the National Academy of Sciences and co-authored with him the 1983 paper, JH Ausubel, WD Nordhaus. A review of estimates of future carbon dioxide emissions in Changing climate: Report of the carbon dioxide assessment committee, pp. 153-185, National Academy Press, Washington DC 1983. 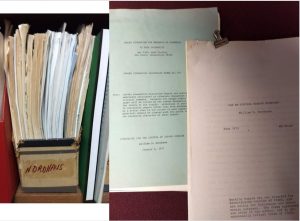